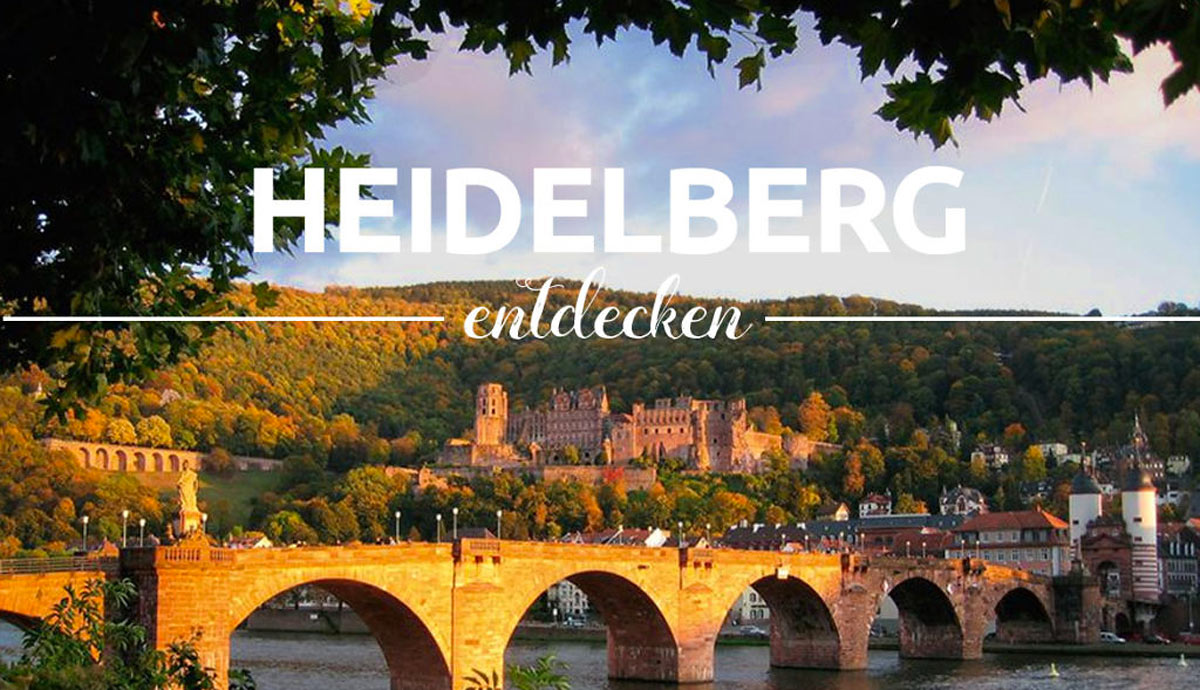 THE BEST SIGHTSEEING TIPS FOR YOUR DAY TRIP TO HEIDELBERG.

The romantic Heidelberg is beautifully situated on the Neckar, surrounded by wooded mountains. Every year the city attracts thousands of tourists with its world-famous castle ruins and picturesque old town.

Heidelberg is one of the most historically significant cities in Germany.

As a former Electoral Palatinate residential town, its history is closely interwoven with German and European history.

Each of Heidelberg's landmarks has its own story to tell - ideal to go on a discovery tour and thus immerse yourself in Heidelberg's over 800-year history.

1 Absolute must see: The Heidelberg Castle 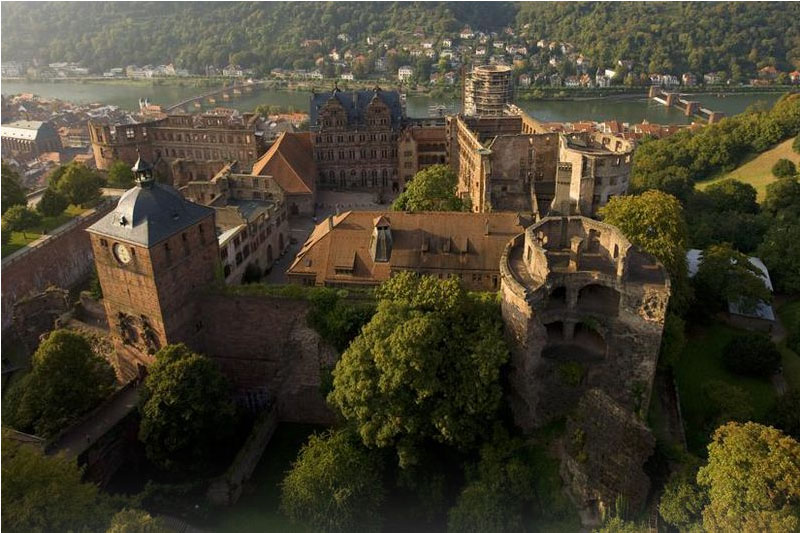 If you visit Heidelberg, the Heidelberg Castle should be at the top of the list.

In the romantic inner courtyard, the facades of the Friedrich and Ottheinrich Building are magnificent and tell a lot about their builders.

In the cellar you can marvel at "the big barrel". And from the balcony you have a wonderful view directly onto the roofs of Heidelberg's old town.

Take the mountain railway to go up from the old town to the castle.

If you plan to go into the courtyard of the castle - which you should definitely do - you must purchase a castle ticket. You can do this at the castle entrance - or at the mountain railway.

You can also find exciting background information for your visit to Heidelberg Castle - here.

The square is one of the oldest in the city and has always been the place for the weekly market. Like most of the central squares, the market square was used in earlier centuries as a venue for public trials. In the middle of the square is the Hercules Fountain, built between 1706 and 1709 to commemorate the enormous efforts of rebuilding the city after the devastation of the War of Palatinate Succession. The market square is framed by the town hall and the Heiliggeistkirche (Church of the Holy Spirit).

Especially in good weather the market place is ideal for a break.
Enjoy the atmosphere with a Latte Machiato.

Directly at the market place to admire: the Heiliggeistkirche, the largest and most important church in Heidelberg.

Its tower dominates the townscape. The red colour is given to the gothic hall church with baroque tower dome through the Neckar valley sandstone.

The interior of the church is particularly worth seeing: the tomb of Elector Ruprecht III and the impressive physics window.

Unfortunately no longer preserved: the Renaissance tomb of Ottheinrich. Already erected during his lifetime, it aroused offence because of the permissive female figures, so Ottheinrich had it covered with cloths.

The gravestone of Elector Ruprecht III

Still preserved and on display in the Heiliggeistkirche: the tombstone of Elector Ruprecht III, as Ruprecht I German King, and his wife Elisabeth von Hohenzollern.

As is often the case with gravestones, several symbolic elements are used to express Ruprecht's power and the loyalty and devotion of his wife.

The Heiliggeistkirche was originally a chapel dependent on the Peterskirche by canon law.

After taking office (1556), Elector Ottheinrich dissolved the monastery and transferred the benefices to the university, and the Heiliggeistkirche became a Protestant parish church.

From 1706 to 1936 the church was divided into two parts by a dividing wall. The nave was Protestant, the choir Catholic.

Since 1936, the entire church has belonged to the Evangelische Landeskirche in Baden.

In the southern side aisle, a modern window in red attracts attention. It is the "physics window" by Johannes Schreiter.

In 1984, it triggered a dispute that attracted attention throughout Germany. Originally, ten nave windows on the subject of science were to be designed, but then only the physics window was implemented.

In the top of the window it is shown as a red and white arrow pointing into a heart. It is obvious to interpret this as the Spirit of God radiating down from heaven into the hearts of men.

Further down the formula E=mc 2 stands out. It is Albert Einstein's basic formula of the theory of relativity. A formula that stands for the greatness of the human mind, but also for its destructive power. For Einstein's theories made modern physics possible on the one hand, but also the construction of the atomic bomb - and the date below right is a reminder of this: On 6.8.1945 the first atomic bomb was dropped over Hiroshima.

a passage from the Epistle of Peter dealing with the judgment of Christ on the last day. Accordingly, the globe explodes on the lower part of the window and blood-red lava flows out.

The second Bible quotation is a promise of peace from the prophet Isaiah.

So it does not stop at an apocalyptic horror scenario.

It is rather a warning to use the inventive power of man not for destructive, but for peaceful and helpful purposes.

Climb the tower of the Heiliggeistkirche.
From above you have a wonderful view of the old town,
the Neckar and the castle.

4 The old Bridge of Heidelberg

The Old Bridge, made of Neckar Valley sandstone, was built in 1788 under Elector Karl Theodor as the ninth bridge on this site.

The previous bridge was destroyed in the catastrophic ice flood of 27 February 1784.
The winter of 1783/1784 had been exceptionally cold and snowy. When thaw finally set in at the end of February, this led to the heaviest flooding that Heidelberg has experienced in historical times.

You will find exciting details for your visit to the Old Bridge here.

If you are good on foot, you can now head for the Philosophers' Path.
From the foot of the Old Bridge there is a direct access via the Schlangenweg.

It winds, partly consisting of stairs, snake-like up the mountain. Behind nearly each winding there are some small view points where one can relax and enjoy the view.

6 Boat trip on the Neckar

Do you like it more tranquil and are you in the mood for a boat trip?
Then up to the landing stage at the height of the congress house. There you will find information about the current departure times.

The journey towards Neckarsteinach is particularly beautiful
- the Neckar bend upstream, past the Dilsberg fortress
and the four castles.

Heidelberg University is the oldest university in Germany, founded by Karl-Ruprecht - whose name the university bears.

The Old University was built in 23 years from 1712 to 1735 according to the plans of the baroque architect Johann Adam Breunig. The building replaced a collegiate building of the university, which was located on this site.

The construction measure was part of the reconstruction of the city of Heidelberg, which was severely damaged in the Palatinate War of Succession (1688 - 1697).

Enjoy a drink in a student atmosphere
in the courtyard of the Marstall.
There, even non-students can have a drink
or enjoy coffee and cake -
at only slightly more expensive prices than the students.

8 Robert Bunsen and the house Riese

If you now continue to stroll along the main road towards the Bismarkplatz, you will pass an imposing statue completely covered in verdigris.

It's the chemist Robert Bunsen, who once did research in the building opposite, the Haus Riese

In 1707 Eberhard Friedrich von Venningen had the building constructed.

By the way, the master builder was Johann Adam Breunig - the one who also built the Jesuit College and the Old University.

The house was built with the express permission of the Elector from ashlars from the partially blown up Thick Tower of Heidelberg Castle.

Above the entrance to the palace is an image of Eberhard Friedrich von Venningen.

By the way, the same statue can be found in the Protestant church in Neidenstein, the traditional burial place of those of Venningen, where he was buried in 1710.

The size of the building makes it clear that Eberhard Friedrich von Venningen held an important position.

He was promoted to Lieutenant General in military service for the Electoral Palatinate, and also accompanied the Elector on journeys abroad, for example to England in 1680, in the function of a secret council. 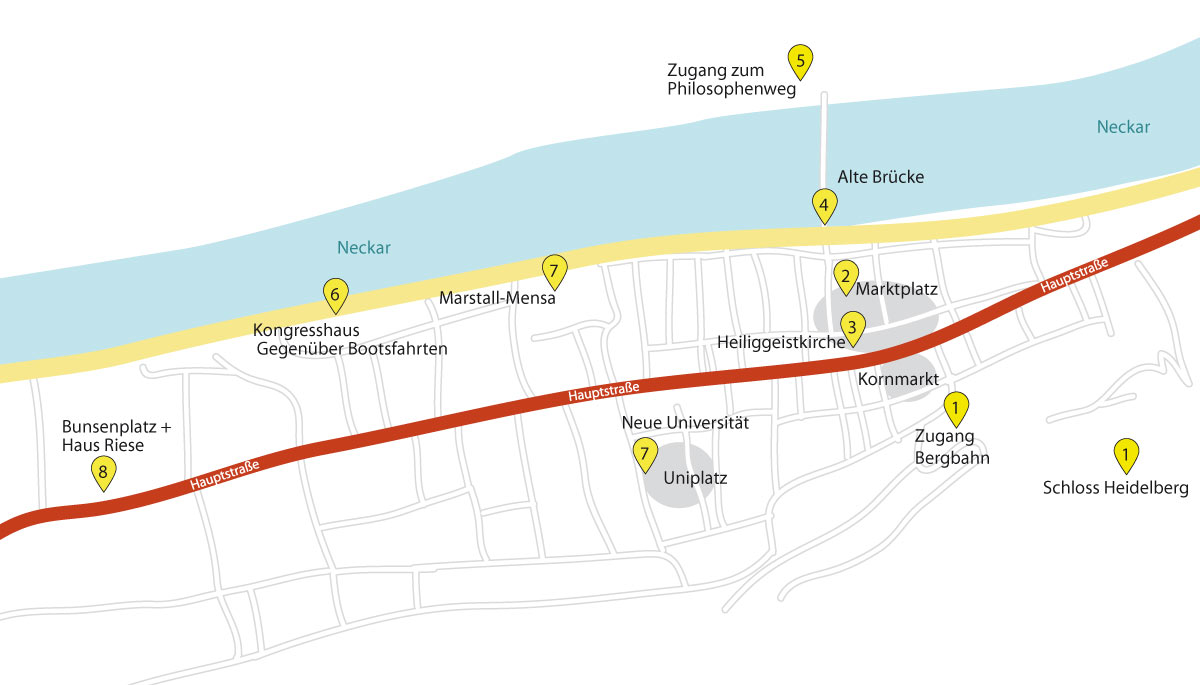 Map with the places of interest.
Click to enlarge!

about Heidelberg Castle you will find under www.schloss-heidelberg.de/en/home

The first two pictures are property of the State Castles and were used with kind permission to illustrate this article.

All other pictures are taken by Christina Grab.